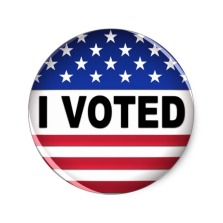 It’s Election Day — If you haven’t voted, you have all day to cast your vote. As President Obama said at a rally, “Don’t Boo, Vote!” It is our responsibility as American Citizens.

At the age of 9, I was involved in two campaigns. My mommy, Juanita Smail was running for Senator for St. Croix, VI and my cousin, Dr. Melvin Evans was running for the first elected Governor of the US Virgin Islands. I remember campaigning with mommy and Dr. Evans. While my mom did not win the Senatorial seat, she was one of the first women to run for Senate. I believe there was one (maybe 2) woman who one that year –

Senator Ruby Rouse, I believe was the first elected women in the VI Senate. My mom ran again in 1972 but also loss. Her passion didn’t stop her involvement in politics. As an educator, she continue here career in education until she ran the campaign of Governor Evans for the Delegate to Congress in 1979. She then joined him in Washington DC as his Research Assistant from 1980-82. While Congressman Evans was not re-elected, he was appointed the US Ambassador to Trinidad and Tobago. Ambassador Evans died while serving in this position. My mommy on the other hand stayed in DC to finish her Master’s in Public Administration and returned to St. Croix and became the Superintendent for St. Croix Schools. She died while serving that position.

Both mommy and Dr. Evans gave me an opportunity to be active in politics from a very young age. I remember in 1980, my first election to vote in, I was faced with a dilemma. As a registered democrat, I didn’t like the democratic nominee. I remember voting for John Anderson who was an independent candidate. While at that young age, I thought an independent could win. Well our country is so much a two-party system and if you aren’t in one of those parties — winning is extremely difficult.

President Obama is the first Presidential Candidate that motivated me to donate multiple times for his candidacy. Voting is so much a part of our responsibility and our right. So many people fought and died for us to have the right to vote. We owe it to the shoulders we stand on to vote. If you haven’t voted through absentee or early voting — GET TO THE POLLS EARLY. VOTE TODAY. You have the power to make a change — Let send a message about our power today. I did my part with absentee voting in MD. Now do your part.

By the way, the picture of mommy was her campaign picture.